Kevin DeYoung and Greg Gilbert argue for a narrowly focused vision of the church in their book, What Is the Mission of the Church?  They claim that the people of God are called to gather for worship and disciple-making.  The church is not an agency of doing good in the world.  Such activity is commendable and ought to be done by individual Christians on their own time.  But such pursuits are distractions from the church’s central task. 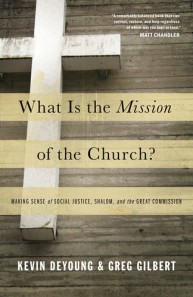 At the heart of DeYoung’s and Gilbert’s book is a narrowly conceived conception of God.  I can’t say whether their portrayal of God drives their vision of the church or whether the dynamic works in the other direction.  It seems certain, however, that their vision of God is closely bound to how they envision the role God’s people in the world.

They speak of God largely in legal and moral terms, leaving aside many of the images and metaphors given in the opening chapters and books of Scripture.  Throughout their work, God’s posture toward the world is antagonistic.  They repeat three times in their survey of the biblical narrative that one question “stands at the very heart of the Bible’s story: How can hopelessly rebellious, sinful people live in the presence of a perfectly just and righteous God (p. 69, italics in original)?”

It seems that this conception of God is necessary to make their case.  If God’s posture toward the world outside the church is antagonistic, then it makes sense for the church to focus on activity within the church and to see doing good to outsiders as merely optional.

Again, to be fair, DeYoung and Gilbert conclude their survey of Scripture by noting that they haven’t drawn out every possible biblical theme (p. 89).  But their singular emphasis on God’s posture of antagonism toward humanity and the world to the exclusion of other depictions of God characterizes their overall presentation.  They consistently isolate certain biblical notes and themes and stress them in a way that marginalizes other biblical themes—even ones that are more prominent or arguably nearer to the central thrust of Scripture.

Here are just a few Scriptural passages that present a different conception of God’s posture toward humanity and his creation.

In God’s climactic revelation of his character to Moses, God stresses his mercy first:

Then the LORD came down in the cloud and stood there with him and proclaimed his name, the LORD. And he passed in front of Moses, proclaiming, “The LORD, the LORD, the compassionate and gracious God, slow to anger, abounding in love and faithfulness, maintaining love to thousands, and forgiving wickedness, rebellion and sin. Yet he does not leave the guilty unpunished; he punishes the children and their children for the sin of the parents to the third and fourth generation” (Exodus 34:5-7).

God will indeed judge the guilty, but the stress is on God’s overpowering goodness and love, not his posture of antagonism.

Second, DeYoung and Gilbert run the risk of too strong a distinction between God himself and the revelation of God in Jesus.  They leave the impression that God and Jesus play “bad cop” and “good cop” with humanity—God, the angry, authoritarian cop; Jesus, the friendly cop who’s really on our side.

John’s Gospel moves in the opposite direction, noting that Jesus truly reveals the very heart of God.  John says in 1:18 that “no one has ever seen God, but the one and only Son, who is himself God and is in closest relationship with the Father, has made him known.”  John puts this revelation of God in striking terms here.  “Made known” is the verb for “exegete.”  Jesus “exegetes” God, drawing out and performing for the world in a 33-year long life what God is really like.

Philip, perhaps trying to sound pious, says to Jesus, “Lord, show us the Father and that will be enough for us” (John 14:8).

Jesus does not respond by pointing to his teaching, as if he has been talking about the Father all along.  He directs their attention to his pattern of life: “Don’t you know me, Philip, even after I have been among you such a long time? Anyone who has seen me has seen the Father” (v. 9).

So, when Jesus goes around healing the sick, restoring sight, casting out demons—restoring shalom and flourishing to a wounded and enslaved creation—he is revealing God’s heart for his world and his passion to restore his creation.  When we see Jesus touching the unclean, going to the outcasts, prostitutes, tax-collectors, sinners, and outsiders, we see anything but God’s antagonistic posture toward humanity.

If that means that God’s ultimate aims involve more than what we previously thought, then let’s adjust our agendas to match God’s.  It just might be that the gospel is bigger than we’ve imagined and that there’s more on God’s heart than is on ours.