I had a molar the size of a Volkswagen pulled last week.  Wanting to fully lean into the pain, I watched a few Coen Bros. films, including “A Serious Man,” a work of pure genius.

The first few times I saw the film, I was pretty convinced that it was a contemporary retelling of the Book of Job.  I’m not so sure of that now, but the parallels are striking.

Larry Gopnik’s life is coming apart.  He’s being harassed by the Columbia Record Company to pay for records he hasn’t ordered, his wife wants a divorce, his kids are a mess, and his off-kilter brother with an oozing cyst has just been arrested for very creepy behavior.

Larry is increasingly frustrated at his inability to get to the bottom of why things are going so badly when he hasn’t done anything.  At the same time, he’s very committed to the pretensions of polite society and hesitates to subject simplistic religious answers to thoroughgoing scrutiny.

These internally competing impulses come to a head in my favorite scene. 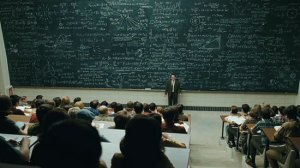 Larry finishes a lecture on the uncertainy principle with the uncharacteristically honest comment that “you can never really know what’s going on.”  As the class dismisses, he exclaims cynically, “but you will be responsible for it on the mid-term!”

He then conducts a fantastical conversation with Sy Ableman, who died earlier in the film, about whether Larry’s mechanisms for grasping the true character of reality are all that effective. 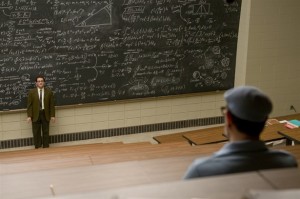 It’s a brilliant interchange, and there’s a sense in which the Coens press their vision of life more forcefully here than anywhere else.  Are there mechanisms available in this world to figure out the larger mysteries of life?

Here’s at least one place where the film resonates with the Book of Job.  True wisdom is all about responding well to life’s challenges rather than finding all the answers to life’s mysteries.  God rebukes Job’s “friends” for simplistically applying a kind of biblical logic to Job’s troubles, thinking they’ve got God and life all figured out.  In the same way, Larry encounters a series of explanations from religious authorities that are increasingly unsatisfying.

“A Serious Man” is a wonderful entrée into biblical wisdom, reminding us of our humble station and to resist the impulse to try to figure out what God is doing when good or bad things happen to us.

Ecclesiastes 5:2: “God is in heaven and you are on earth, so let your words be few.”