I’m very happy to be part of the blog tour for Daniel Kirk’s new book, Jesus Have I Loved, but Paul?  Here’s the tour’s home page.  I’m discussing the book’s second chapter, called, “New Creation and the Kingdom of God.” 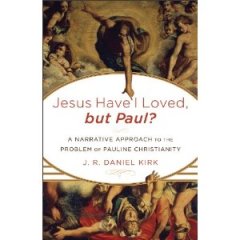 Daniel’s burden in this book is to demonstrate the organic connection between Jesus and Paul.  He does so by relating both of them to the narrative of Scripture.  Paul may indeed use different terms and metaphors than Jesus, but they’re working from the same story and speaking of the same cosmos-transforming realities.

This chapter relates Jesus’ proclamation of the Kingdom of God to Paul’s teaching about New Creation.

The problem here is that whereas Jesus came preaching the Kingdom of God, Paul doesn’t use this term very often.  Might it be the case that whereas Jesus preached the in-breaking reign of God and a communal ethic, Paul preached only personal transformation and private devotion?

Daniel begins by rehearsing the narrative of Scripture, tracing its dramatic contours.  Scripture tells the story of God’s commission to humanity to rule creation on God’s behalf.  Humanity surrendered this task and plunged the whole of creation into slavery to Sin, Death, and the powers of darkness.

This multi-faceted mess demands a profoundly far-reaching solution, one that actually deals with the problem.  For God to enact anything like a serious salvation means he must deal with the problem of humanity’s rule over creation.  For God’s world to function rightly, there must be human agents of God’s reign overseeing creation’s flourishing.

This is the point of connection between Jesus and Paul.

In Mark’s Gospel, “Jesus is the agent of the reign of God because he is the human being entrusted by God with the task of restoring humanity’s God-subjected and God-ordained rule to the world” (p. 38).

Jesus demonstrates the restoration of God’s rule by casting out demons and healing sickness—acts of shalom-restoration in fulfillment of God’s original commission to humanity.

Daniel connects Jesus’ status as Son of Man in Mark to Paul’s use of Jesus’ resurrection.  This may be a bit surprising at first glance, but it makes perfect sense.  The resurrection of Jesus from the dead represents the in-breaking of the future reality of God’s restored creation into the present.  The future invades our present reality and radically transforms it, bringing the attendant realities of the New Creation, God’s Kingdom presence.

God created the world and placed humans in it to rule the world on God’s behalf.  In the biblical narrative, the abdication of that rule introduces spiritual, physical, relational, social, agricultural, and other failures that mark the world we experience day by day.  This provides the framework within which we can understand why, for Paul, the idea of Jesus as Lord is inseparable from the idea of a new creation.  When Jesus is raised, he is enthroned as Lord over all things.  Jesus’s resurrection is itself a crucial component of the restoration of humanity, Jesus’s assuming the mantle of a new Adam who reigns over the earth (1 Cor. 15).  This return of humanity to its primal calling (ruling the world on God’s behalf) means a full-scale restoration of every aspect of the cosmos gone wrong (p. 41).

The resurrection of Jesus from the dead and his installation as cosmic Lord, then, is the connection between Paul and Jesus’ teaching on the Kingdom of God.  For Paul and the Gospels, Jesus fulfills the hopes of a human obeying God’s original command to rule creation on God’s behalf, overseeing its flourishing for the glory of God.

And all those who confess Jesus as Lord participate in the reality of God’s gracious reign, being “drawn by the Spirit of God into the realm where Jesus is reigning over all things in God’s name and thereby making all things new” (p. 50).

For Jesus, to proclaim the reign of God is to heal, forgive, restore, exorcize, and speak.  For Paul, to proclaim the reign of the resurrected Christ is to heal, forgive, embrace, restore, exorcize, and speak.  Both Jesus and Paul declare a coming future that breaks in on every aspect of life in the present, and both envision the communities formed by their messages to be the continuing agents of the coming new creation that is the dominion of God.  Both call would-be disciples of Jesus to continue the ministry of Jesus, to embody the identity of Jesus to every corner of the world that God claims as his own (p. 51).

This book is great for anyone looking for a good workout in the Gospels and Paul.  But beyond that, Daniel’s clear-eyed vision of the hope-generating and heart-igniting realities of God’s comprehensive salvific work and his ability to articulate them compellingly make this a “must-read.”