N. T. Wright claims that various branches of the church have misread or ignored the Gospels.  In speaking of conservative evangelicals, he notes that they have spent much time defending the Bible’s historicity, but haven’t done so well at getting into the Bible itself, understanding its texts, reckoning with the canonical logic. 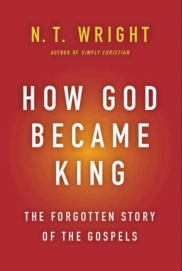 Evangelicals run the risk of flying the flag of biblical authority but saying what they expect the Bible to say, rather than what it actually does say.

Such “conservatives,” then, have stressed the historicity of the gospels as part of their insistence that “the Bible is true.”  But when it comes to interpretation and meaning, those same “conservatives” are regularly to be found on exactly the same page as Bultmann, reading most of the stories in the gospels as signposts toward the cross and the faith of the early church.  I recall one colleague proudly telling me that his Christmas sermon was going to be on Matthew 1:21: “you are to give him the name Jesus; he is the one who will save his people from their sins.”  In other words, neither incarnation nor kingdom were going to be mentioned; Christmas was simply another occasion to preach the (supposedly Pauline) message of the cross.  When such people claim to be “Bible Christians,” I find myself saying (at least in my imagination): “If you’re a ‘Bible Christian,’ how come you don’t know what the gospels are there for?  How is it that you simply treat them as somewhat random illustrative material for the thing you obviously want to focus on, the saving death and resurrection of the divine Savior?”

What I observe is this.  Faced with a choice between the creed (some version of it) and the canon of scripture, in which the four gospels occupy such a central position, the church has unhesitatingly privileged the creed and let the canon fend for itself—which it hasn’t always managed to do very successfully.  The same is true when, in Protestantism, the great early creeds are implicitly replaced as the “rule of faith” by the various sixteenth- and seventeenth-century formulas that highlight the Reformers’ message of “justification by faith.”  This too, in its turn, becomes the central thing, and the four gospels are valued insofar as they illustrate it and not much beyond (pp. 23-24).

5 thoughts on “N. T. Wright on Evangelicals & the Gospels”