I’m lecturing on Revelation Thursday night and, as always, am enjoying dipping back into Richard Bauckham’s brilliant book, The Theology of the Book of Revelation.  A snippet:

John’s work is a prophetic apocalypse in that it communicates a disclosure of a transcendent perspective on this world.

John (and thereby his readers with him) is taken up into heaven in order to see the world from the heavenly perspective.  He is given a glimpse behind the scenes of history so that he can see what is really going on in the events of his time and place.  He is also transported in vision into the final future of the world, so that he can see the present from the perspective of what its final outcome must be, in God’s ultimate purpose for human history.  The effect of John’s visions, one might say, is to expand his readers’ world, both spatially (into heaven) and temporally (into the eschatological future), or, to put it another way, to open their world to divine transcendence.  The bounds which Roman power and ideology set to the readers’ world are broken open and that world is seen as open to the greater purpose of its transcendent Creator and Lord.  It is not that the here-and-now are left behind in an escape into heaven or the eschatological future, but that the here-and-now look quite different when they are opened to transcendence. 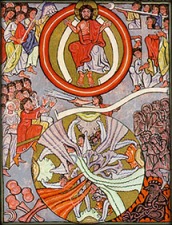 The world seen from this transcendent perspective, in apocalyptic vision, is a kind of new symbolic world into which John’s readers are taken as his artistry creates it for them.  But really it is not another world.  It is John’s readers’ concrete, day-to-day world seen in heavenly and eschatological perspective.  As such its function, as we shall notice in more detail later, is to counter the Roman imperial view of the world, which was the dominant ideological perception of their situation that John’s readers naturally tended to share.  Revelation counters that false view of reality by opening the world to divine transcendence.  All that it shares with the apocalyptic literature by way of the motifs of visionary transportation to heaven, visions of God’s throne-room in heaven, angelic mediators of revelation, symbolic visions of political powers, coming judgment and new creation—all this serves the purpose of revealing the world in which John’s readers live in the perspective of the transcendent divine purpose (pp. 7-8).

6 thoughts on “Revelation & the Transformation of the Imagination”