Paul refers to his original gospel preaching to the Galatians with quite striking language.  In fact, he doesn’t refer to his preaching or teaching.  Here’s what he says:

You foolish Galatians!  Who has bewitched you, before whose eyes Jesus Christ was publically portrayed being crucified?

It’s not that they’ve clearly heard the gospel, or were taught it clearly.  While he makes reference to such teaching elsewhere in the letter, here Paul regards them as having “seen” a public portrayal of Jesus Christ being crucified.

To what is he referring?  I don’t imagine it’s the flannelgraph Sunday School lessons of my childhood. 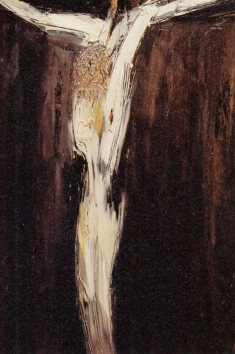 I think Paul is referring to his physical condition that brought about his initial visit to Galatia.

In Gal. 4:14, he notes that when he originally came to them, his physical condition “put them to the test,” probably indicating that he was a wreck in some way and for some reason.

This founding visit, in my opinion, comes just after Paul is stoned and left for dead in Lystra (Acts 14:19-20).  A group of men who have stoned someone and suppose that person to be dead have likely done a good job of breaking bones and perhaps even delivering serious blows to the head with large rocks.

As in other instances in Luke-Acts, Luke is indicating that Paul is killed, left for dead, and miraculously resuscitated—brought back to life after having died.  But that doesn’t mean he’s all cleaned up and put back together.

When Paul and his companions arrive at this community (or, these communities) for the founding visit, they probably do so in order to rest and help Paul recuperate.  He’s in a position of total weakness and physical trauma.  He’s in such bad shape (skull misshapen? bones sticking through the skin?) that he admits that his condition turned their stomachs and put their hospitality to the test.

Looking back, Paul frames his condition as a performance of the crucifixion of Jesus Christ.  Paul embodied Christ’s world-altering event, portraying in his condition, his bearing, and in his mode of ministry, the cross of Christ.

Paul’s original visit, then, was Paul improvising Jesus, specifically in his self-giving on the cross.  It was an adaptation—Paul playing a character in a new time and new place—that was a faithful re-telling and re-performing of the original.

And for Paul, the Galatians’ defection is all the more serious for having witnessed a public display of the crucifixion of the Son of God.