I just finished reading a Christmas gift: Fordlandia: The Rise and Fall of Henry Ford’s Forgotten Jungle City, by Greg Grandin.  It’s a fascinating account of Henry Ford’s disastrous effort from 1928-1945 to establish a rubber-producing plantation in Brazil. 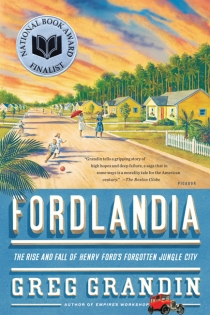 It’s a tale of overpowering arrogance and presumptuous folly, but also of the impossibility of reigning in the destructive effects of global capitalism once they’re unleashed.  Grandin reveals Henry Ford as a man fooled by his obvious success into assuming that his methods could be transplanted to any spot on the globe and into any other field, including botany.

Most astonishing is Ford’s unshakable faith in his inevitable success and his purposeful ignoring of experts.  In fact, Ford’s resolve strengthened in the face of contrary counsel, even if well-founded.

Grandin captures this folly well in his account of a man named Archibald Johnston:

Yet he also suffered from the occupational hazard common to Ford men, a kind of crackpot realism where decisions supposedly justified by observation were really shaped by a sense of infallibility born of success, a belief that the company could, as Johnston put it, “do anything within the power of man.”

Charles Lindbergh, Ford’s friend, described his experience working for the Ford Motor Company’s aviation division thus: “Once they get an idea, they want to start in right now and get action tomorrow, if not today.  Their policy is to act first and plan afterward, usually overlooking completely essential details.  Result: a tremendous increase of cost and effort unnecessarily.”  And indeed Sorensen once told Lindbergh, “Don’t forget, when you want to do something, the most important thing is to get it started.”  Don’t let the experts, the head of production at the Rouge advised, “keep it on the drafting board, they’ll keep on drawing lines as long as you’ll let ‘em.”

Here’s an interview with the author.  Some other fascinating videos on Fordlandia can be seen here and here.

One thought on “Fordlandia: A Parable”