In class the other day we discussed Paul’s personal presence.  He notes in 1 Corinthians 2 that when he was in Corinth he intentionally avoided impressive rhetorical displays by purposefully embodying the crucified Christ.

Passages like that provoke the imagination—how exactly did that play out?  And, beyond that, what did Paul look like?

We can’t know for sure, obviously, but we get a few clues from the New Testament and early church history.  Putting it frankly, he probably wasn’t all that pleasant to behold.

He wasn’t terribly polished and well put-together, and was probably a poor public speaker.  In 2 Cor. 10:10, he acknowledged that many in the Corinthians church were criticizing him for his unimpressive preaching:

I know what some people are saying: “His letters are severe and powerful, but in person he is weak and his speech is worth nothing” (CEB).

Beyond being unimpressive, however, his appearance may have actually been revolting.  In Acts 14:19-20, Luke records this incident:

Then some Jews came from Antioch and Iconium and won the crowd over. They stoned Paul and dragged him outside the city, thinking he was dead. But after the disciples had gathered around him, he got up and went back into the city. The next day he and Barnabas left for Derbe.

Luke is provoking our sanctified imaginations regarding the brutality of this scene.  It’s supposed to be shocking!  Paul’s injuries must have been horrible if a riotous crowd fueled by religious zeal brutalized Paul so badly that they thought he was dead!

Just after this episode, Paul and his companions made their way to Derbe, likely one of the churches to which he wrote Galatians.  In Galatians 4, Paul says that he visited them the first time because of a bodily condition that “put them to the test” (Gal. 4:13-14).

He probably had to crash in Derbe just to recuperate from the broken bones, cuts, bruises, and crushed skull.  It’s reasonable to assume that if a frenzied crowd stoned a person (think “boulders,” not “stones”) to the point where they were sure he was dead, that’s the sort of shape he’d be in.

His physical presence in Galatia probably turned stomachs.  He finishes his letter by saying of his scars, bruises, and injuries that “I bear on my body the marks of Jesus” (Gal. 6:17). 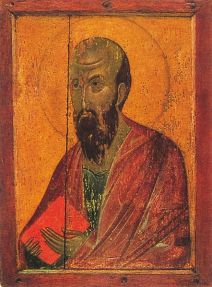 I used to joke with my undergraduate students that if Paul were to speak in our university chapel, the large screens at the front that display the speaker’s image might just so happen to not be working that day!

I’m not sure how accurate it is, nor to what extent these New Testament indications influenced it, but there’s a mention of Paul’s appearance in the second-century apocryphal text called “The Acts of Paul and Thecla.”  It’s sort of a comical description, but it imagines Paul as “a man small in size, bald-headed, bow-legged, stocky with eyebrows meeting, rather long-nosed.”

If we imagine Paul through our modern projections of what ministry super-stars are supposed to look like, we’d be seriously disappointed if we ever did meet him!