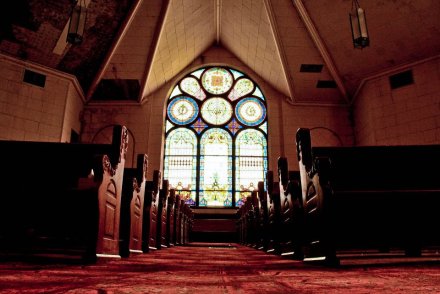 O God, whose blessed Son made himself known to his disciples in the breaking of bread: Open the eyes of our faith, that we may behold him in all his redeeming work; who lives and reigns with you, in the unity of the Holy Spirit, one God, now and for ever. Amen.

We are a week into the Easter season, when we celebrate God having raised Jesus from the dead.  The resurrection of Jesus is the climactic moment of God’s great work of salvation and it’s significant in many wonderful ways.  In the death and resurrection of Jesus, God defeats sin and death.  Death, of course, our great enemy, is unable to hold onto Jesus, powerless to keep him in the grave.

Our horrible enemy is now defeated—that’s good news!  The death and resurrection of Jesus is also significant because it is God’s confirmation that he really means to do what he has said he’s going to do.  God promised that he was going to make all things new, renew the world, end suffering forever, remove the curse from creation.  No more hunger, no more betrayal, no more poverty, no more hatred and fighting, no more broken hearts.  When God’s kingdom comes, all our hopes for a world made new will be fulfilled.

Well, where is it!?  Where is this new world!?  That’s the right question.  We want it now, God!  That’s the proper prayer, though we usually say it like this—“may your kingdom come, may your will be done on earth as it is in heaven.”

It isn’t here yet, but Easter teaches us that it’s on its way.  Paul says that Jesus is God’s “yes” that his promises are indeed on their way to being fulfilled.  It’s been so long that humanity has waited for these promises to come true, but when God raised Jesus from the dead, it was his way of saying to all of us, “It’s coming.  The new world is on its way, with Jesus as King.  Be patient; only a little while longer.”

And God has begun to fulfill his promises in the church.  When Jesus ascended into heaven to sit on his throne, he sent his Spirit to dwell among us.  God’s kingdom has broken out among us, God has created us to be the Kingdom of God and he has done so by his own resurrection power.  The same power that raised Jesus from the dead is at work among us and in us to truly fill out and understand and explore and perform that reality called The Kingdom of God.

It is vital, therefore, that we live in the shadow of Easter Sunday.  The resurrection must dominate our community, our lives, our relationships, how we imagine who we are and what we’re supposed to do.

There’s a small problem, however.  We find that living in the shadow of the resurrection isn’t all that easy to do.  It’s one thing to believe in the resurrection of Jesus from the dead, but an altogether different thing to know how that changes anything.  What difference does it make?

We are not at all used to seeing the world differently in light of the resurrection.  It’s far easier to confine the resurrection to something we talk about once a year.  It’s natural to live as if other things are more real and far more significant—we’re just used to it.  It’s difficult to truly see God’s salvation in action.

We find ourselves to be a lot like the disciples in the Luke passage.  Just before Jesus showed up in their midst, they were talking excitedly about how Jesus had risen from the dead.  Unbelief is not the problem here.  They truly believed it.  But when Jesus actually showed up among them, they were gob-smacked and had no clue what to do.  When he appeared they thought he was a ghost, they were afraid, startled, and terrified, and were even doubting.

We find ourselves to be just as clueless, if not more so.  Believing in the resurrection is one thing.  It isn’t difficult to affirm it as an article of faith.  But knowing what we’re supposed to do in response to it, in light of it—that’s an entirely different thing.

But this is the role of the church; this is our task—to see the world anew in light of what God has done in Jesus.  We are called to imagine the possibilities created by the resurrection of Jesus Christ.  This is how God actually wants to change the world here and now—through a church that sees the possibilities in peoples’ lives in light of the resurrection of Jesus from the dead.

That’s a high calling.  But that’s why we just prayed together the collective prayer; “open the eyes of our faith, that we may behold him in all his redeeming work.”  This is a prayer for greater and more effective faith.  We need a clarified vision to always be seeing the reality of the resurrection more clearly and to always be knowing how it changes everything, because that’s hardly ever obvious and hardly ever straightforward.

We see the prophet doing this in Micah 4.  Micah looks forward to the future when all the nations of the world will stream to Jerusalem and will worship the God of Israel—the one true God.  He rejoices in this and draws strength from it.  He needs that strength because that reality isn’t there yet for him.  The passage ends on a wistful, slightly tragic note.  “Things will be awesome in the future . . . ,” but then the heavy sigh “. . . we’re not there yet.”

He longs for that day because right now all the nations are walking after their own gods, not the one true God.  And of course this leads to all sorts of oppression and injustice.  But he holds on to that vision so that he can have the power to live in light of it.

So, God has raised Jesus from the dead—everything’s changed!  And we must embody that reality in our lives and in this community.

How?  What on earth might that mean for us at Midtown?  How do things change in light of the resurrection.  I’ll mention just a few possibilities from our passages.  If these provoke further suggestions, let’s discuss those, too.

First, we’re a community of healing and restoration.  We see this obviously in the Acts text with the man born lame.  This is one of our most basic tasks—to do good in the name of Jesus.  To look at ourselves and this neighborhood, take an honest assessment, identify needs, and then come up with creative and imaginative ways to bring about restoration and healing—seeking to get people back up on their feet.  And we don’t do this in order to get a hearing for the gospel.  Doing creative acts of restoration and healing is the gospel.  We carry out redemptive acts that signal that God is making the world new, because these are the kinds of things we’ll be doing all the time when the world is made new.

And, just like in Acts, when we have the opportunity to do good, we mention plainly that we’re doing these things in the name of Jesus, whom God raised from the dead.

We’re also a community that gives praise to God.  Praise dominates the Micah text, the psalm, and Acts.  When we praise God we’re doing several things.  We’re pondering the great things that God has done—it’s educational.  We’re re-learning and remembering what God is like and how gracious and good he is.  But we’re also training our emotions to love and prize God, and to long for his creation to be made new, just as he’s promised.

The Apostle John draws several implications from what God has done in Christ.  In the 1 John text, we see that we must be a community that confesses our sin to one another and to God.  If we deny our brokenness and our being sinners, we are liars, refusing to recognize our need of God—refusing to live in reality.  We must confess our condition as sinners, always owning our need of God in Christ.

We must be a community that confesses our sins.  This isn’t easy.  When we sin against one another, what do we typically do?  We typically seek for ways of getting out of the situation while preserving as much of our dignity as possible.  If we need to maybe apologize a little, we’ll do it grudgingly.  But doing that doesn’t lead to restoration and to community wholeness.  Only when we sit before a person  and name what we’ve done, recognizing the damage that we’ve done with our words or deeds, and asking for forgiveness, do we actually enjoy complete restoration with a person we’ve wronged.

We must do the same before God.  When we’ve sinned we must trust God that if we speak honestly and plainly to him that he will do what he says he does, and pardon our sins and forgive and cleanse us from any and every stain.

These are just a few indications of how the resurrection re-defines a community.  We are not some random community group.  We are the church, owned, claimed and oriented completely by the death and resurrection of Jesus.  Because that’s the case, we must take up the wonderful task of seeing the world anew, always asking for grace from God so that our vision may be renewed and restored for the glory of the risen Lord Jesus.