Discussions of Paul and the Mosaic Law have bogged down over the last several years as the sun has set on what might be called “the new perspective era.”  Two new books have appeared, however, that treat the issue from new angles of approach.

Preston Sprinkle, my former teammate on our world championship softball team (well, intramural champs, but we were unstoppable) has written Paul and Judaism Revisited: A Study of Divine and Human Agency in Salvation. 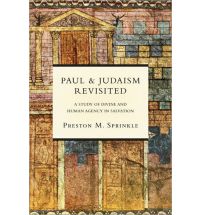 He takes up and advances Francis Watson’s approach in his book Paul and the Hermeneutics of Faith, applying Watson’s proposal to a comparison between Paul and the Dead Sea Scrolls.

The second book is by Brian Rosner, called Paul and the Law: Keeping the Commandments of God.

Most studies on this issue traverse the same territory–Romans and Galatians–but Rosner focuses on 1 Corinthians.  This very well may bring a new dimension to the discussion, which would be warmly welcomed.

From the book’s page at IVP:

Understanding “Paul and the law” is critical to the study of the New Testament, because it touches on the perennial question of the relationship between the grace of God in the gift of salvation and the demand of God in the call for holy living. Misunderstanding can lead to distortions of one or both. This fresh and valuable study is something of a breakthrough, bringing neglected evidence to the discussion and asking different questions of the material, while also building on the work of others. Brian Rosner argues that Paul undertakes a polemical re-evaluation of the Law of Moses, which involves not only its repudiation as law-covenant and its replacement by other things, but also its wholehearted re-appropriation as prophecy (with reference to the gospel) and as wisdom (for Christian living).