Sports Illustrated has an interesting article on the best and worst Super Bowl halftime shows. I’m looking forward to the game but probably won’t pay much attention to the halftime festivities. They’re more often than not disappointing and unremarkable, and it’s a great time to get up and replenish the hummus supply.

A few years ago, Sports Illustrated, in another article, ranked U2’s 2002 performance as the best ever. I’d argue the same. 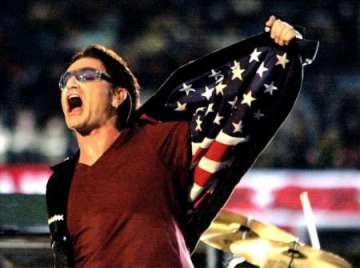 That was the first Super Bowl since the terrible events of Sept. 11, 2001 and the country was still getting to grips with what had happened.

It’s only 12 minutes, but it was absolutely powerful.  Bono had a special jacket made up with football stitching and an American flag for the inside lining.

Just after a brief bit from the haunting “MLK,” you can hear Bono praying a line from Psalm 51: “Oh Lord, open my lips that I might show forth thy praise.”

What I love is that the performance unmistakably gathered the emotions of the country, but did so in a way that didn’t endorse any particular political viewpoint or foreign policy agenda.