In a recent class, we discussed how the modern value of convenience works against the cultivation of rich community life in churches. We are rushed and hurried, and the frantic and harried pace of life shapes us in such ways that we see occasions where we can linger with one another as “wasted time.” We’re not accomplishing anything! We can do this more conveniently!

I was struck by the following passage in Michael Moss’s book, Salt Sugar Fat: How the Food Giants Hooked Us, a fascinating look at the processed food industry. It reveals just one way in which convenience as an obvious value of modern life was reinforced by advertising over the last half-century.

Every year in New York City, the top executives of companies that sold a wide range of goods gathered together under the auspices of the Conference Board, an august association best known today for conducting the “consumer confidence” survey. In 1955, the dinner speaker was Charles Mortimer, and he got right to the point. Food, clothing, and shelter were still important, he told the crowd. But now there was a fourth essential element of life that could be “expressed in a single word—convenience—spelled out with a capital ‘C.’”

“Convenience is the great additive which must be designed, built in, combined, blended, interwoven, injected, inserted, or otherwise added to or incorporated in products or services if they are to satisfy today’s demanding public. It is the new and controlling denominator of consumer acceptance or demand.” 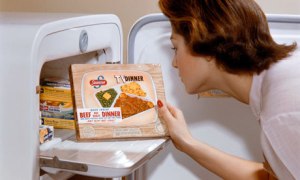 “Modern Americans are willing to pay well for this additive to the products they purchase,” Mortimer told the executives. “Not because of any native laziness but because we are willing to use our greater wealth to buy fuller lives and we have, therefore, better things to do with our time than mixing, blending, sorting, trimming, measuring, cooking, serving, and all the other actions that have gone into the routine of living.”

As if on cue, time-saving gadgets and gizmos started arriving in the grocery store that year that helped the modern homemaker trade a little more of her new wealth for some extra time away from the kitchen. Ready-to-bake biscuits appeared in tubes that could be opened by merely tugging a string. Special detergents came out for electric dishwashers that had special compounds to get off the water spots. One entrepreneurial firm even made plastic lids with spouts that snapped on cans of milk or syrup for easier pouring (pp. 60-61).

What I find so sinister about convenience is that it is in the midst of “all the other actions that have gone into the routine of living” that we often find rich fellowship with one another and mutual sharing. And with the systematic elimination of such moments from our lives, we’ve inadvertently lost opportunities to cultivate and strengthen bonds of friendship and community, both in families and in churches.

2 thoughts on “The Tyranny of Convenience”