The academy’s a funny place. And by “funny” I mean pretty bizarre.

I’m reading Dear Committee Members, a novel by Julie Schumacher that wonderfully captures the character of relationships and the varieties of inter-departmental dynamics on a college campus. It reminds me of Stanley Hauerwas’s comment, in Hannah’s Child, that academic departments are hives of envy and professional jealousy. 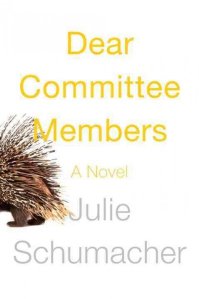 The novel consists entirely of letters of recommendation that English professor Jason Fitger writes for students and colleagues for jobs, applications to grad school, and faculty promotions. He’s angry about his failed marriage and several other relationships, about a variety of professional slights, the university administration’s treatment of his department, and also filled with angst over the general state of the academy. What’s hilarious is that much or all of this comes out in his letters of recommendation.

This is an excerpt from one of his letters in support of a student applying to law school:

I have known Ms. Zelles for approximately nine months. She sat in on my undergraduate workshop last spring—boggling the minds of the younger students with irrelevant theoretical asides—and is currently enrolled in what may be the last graduate-level fiction class ever taught at Payne. (I’m sure you read my screed last month in the campus rag.) Her work is meticulous but not very interesting. Moment of truth: personally, I don’t care for Ms. Zelles, who may be ideally suited to law school. She is obviously brilliant, but I find her off-putting and a bit of a cipher. She has a mind like a bric-a-brac storehouse of facts: a surplus of content put to questionable use.

Fitger weaves into many of his letters complaints about the state of the humanities in academia, takes shots at former colleagues to whom he’s writing, and often berates companies to which he’s writing for not being worthy of employing a student whose application he’s writing to support.

I’ve found it brilliant and difficult to put down. And I must say that I’ve been struck that perhaps I haven’t really explored the possibilities afforded by the letter of reference genre. Perhaps some creativity is in order, next time I’m asked . . .