There are few sporting events like The Masters and there’s nothing like the final round on Sunday for unpredictability and drama. 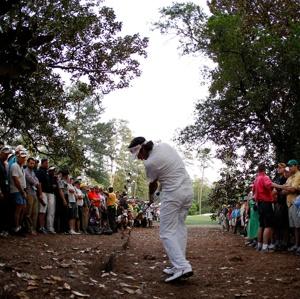 The big story is Bubba Watson’s victory.  His swing is homemade and he’s a “feel” player, the type of golfer for which The Masters is perfect.

Bubba wears his emotions on his sleeve and is a genuinely good guy, so it was fun to see him win.

Masters final rounds inevitably involve tragedy on a grand scale, and it was tough to see Phil Mickelson make triple bogey after a solid start.

Tiger Woods seemed completely lost the entire week.  Having won two weeks ago in convincing fasion, he seemed poised to do well.  His self-evaluation afterwards indicates, I think, that he’s in the same mental wilderness as other great champions who have “lost it.”

As I wrote previously, athletes are often the last people to assess their performances honestly.  How much more difficult is that for Woods, having been raised by a father who regularly made messianic predictions of his son?

2 thoughts on “Monday after The Masters”